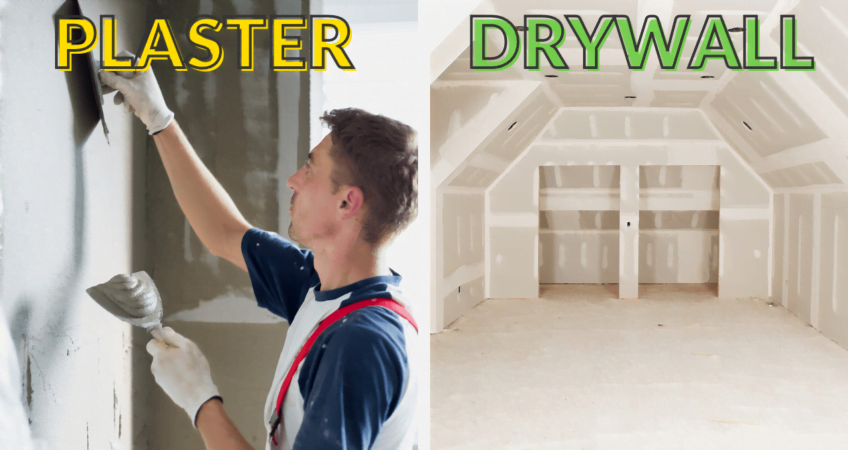 Posted by In Blog, Drywall

Gypsum is used in the manufacture of drywall because it does not crack. As part of the process of finishing the inside of a house, sheets of it are attached to the wooden studs using nails. Plaster, on the other hand, dries to a considerably more rigid state than drywall does, and it requires more labor and costs more money. The main difference between drywall and plaster is their composition. Drywall uses gypsum board while plaster uses cement and lime or gypsum.

Drywall is considered to be better than plaster. Following are some reasons why it is preferred over traditional plastering techniques:

Drywall is typically sold in enormous sheets of compressed gypsum that are wrapped in paper. Directly attaching it to the studs can be done by nailing or screwing it, however screwing is advised by the experts. Furthermore, a joint compound needs to be applied to the seams in order to make a continuous surface. A joint compound is a plaster-like compound and is more commonly referred to as mud. In comparison to plastering a wall, this method requires far less material and significantly less time to complete.

Plaster can be made from a variety of ingredients, the most common of which are gypsum, lime, or cement mixed with water and sand.

In the traditional method of laying a plaster wall, the framing studs must first be covered with wood lath. Wood lath consists of thin strips of wood that are attached horizontally to the studs and are closely spaced between them. A base coat of plaster is applied by the worker to cover the gaps, and then two or three further layers of plaster are applied as topcoats to make a smooth surface.

Is it better to plaster or drywall?

Plaster is, by its very nature, a more enduring surface than drywall, even higher-level drywall treatments. This is true regardless of the quality of the drywall finish. Plaster surpasses drywall in a number of important categories, including insulation, soundproofing, and fireproofing. Plaster is also more cost-effective than drywall. Plaster has another advantage over other building materials in that it does not support the growth of mold due to its inherent composition.

Which one is cheaper? Drywall or plaster?

Drywall is cheaper than drywall when it comes to the cost of installation, despite the fact that the material costs of plasterboard and drywall are generally the same. Plaster is also more difficult to work with. The fact that applying plaster requires more specialist work than laying drywall is something that has already been brought up.

Can you replace plaster with drywall?

It is possible to cover lath (a thin flat strip of wood), and plaster walls with drywall or to replace them entirely in order to bring them up to date. By placing drywall sheets on top of the old plaster, you can hide its appearance. This is the easiest and cleanest method to do the task at hand, but it is not usually the most productive.

What are the advantages of plaster?

What are the disadvantages of using plaster?

It takes several days to finish the drywall to a smooth surface since the joint compound that seals the joints between panels needs to dry before another coat can be applied. Plaster does not generate any dust on its own, with the exception of a trace quantity that is produced when water is first poured to the material.

How much more expensive is plaster than drywall?

Are plaster walls hard to clean?

Plaster is a dense material; therefore, you do not want to get it too moist, or else you will soon be in need of the services of an expert in plaster repair. When you consider that the plaster could have lasted for decades, this may be an issue. If you want to clean your plaster without causing any damage to it: Soak a gentle cloth in warm water, and then squeeze as much water out of it as you can.

What kind of walls do old houses have?

In newly constructed homes, a single layer is often put over the blue board, which is a specialized kind of drywall.